Conquest Brewing Company was the first customer when D2 Woodcrafting was just starting out. Their custom flight deck began me down this road and I’ve never looked back. The partnership has continued over the years, with refinements made to their initial flight deck design, and also the development of new designs for more flight offerings.

As more and more brewpubs and bars look to incorporate a wider array of on-tap offerings, the taps themselves have undergone a “compression” of sorts. In the wall space where you once would fit 10 taps, you now want to squeeze in 20 taps. While that has all kinds of behind the scenes logistical concerns (more hoses, more CO2, more refrigerator space) it also means larger tap handles are not able to fit into the allotted space.

Many locations have moved to generic tap handles and TV screens above the taps identifying the offerings by number.

While this might work, it also takes away the creativity and uniqueness of a marketing opportunity for the brewery of having their on-tap offering noticed, based upon recognition of their tap handle.

Conquest wanted to explore a smaller tap handle design to allow both the ability to fit in tight spaces and also be true to their existing design elements.

I present to you the Conquest mini tap handle. 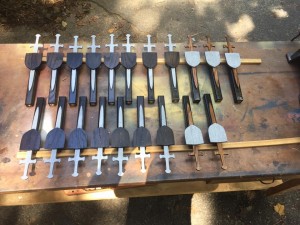